Incoterm2000 is a shipping terms, to distinguish buyer and seller's responsibility of their trading work

Sending goods from one country to another, as part of a commercial transaction, can be a risky business. if they are lost or damaged, or if delivery dose not take place for some other reason, the climate of confidence between parties may degenerate to the point where a law suit is brought, Therefore, above all, sellers and buyers in international contracts want their deals to be successfully completed.

If, when drawing up their contract, buyer and seller have some commonly understood rules to specifically refer to, they can be sure for defining their respective responsibilities simply and safely. in so doing they eliminate any possibility of misunderstanding and subsequent dispute.

The purpose of Inconterms is to provide a set of international rules for the interpretation of the most commonly used trade terms in foreign trade. Thus, the uncertainties of different interpretations of such terms in different countries can be avoided or at least reduced to a considerable degree.

Frequently parties to a contract are unaware of the different misunderstandings, disputes and litigation with all the waste of time and money that this entails. in order to remedy these problems, the international Chamber of Commerce first published in 1936 a set of international rules for interpretation of trade terms. These rules were known as INCOTERMS 1936. Amendments and additions were later made in 1953, 1976, 1980, 1990 and presently 2000 in order to bring the rules in line with current international trade practices.

Incoterms have been revised to take account of changes in transportation techniques, such as the unitization on cargo in containers, multimodal transport and roll on roll off traffic with road vehicles and railway wagons in short-sea maritime transport - certain terms have been consolidated and rearranged and to render them fully compatible with new developments in electronic data interchange EDI

The main reason from the 1990 revision of Incoterms was the desire to adapt terms to the increasing use of electronic data interchange. In the 1990 version of Incoterms this is possible when the parties have to provide various documents such as commercial invoices, documents needed for customs clearance. as well as transport documents. particular problems arise when the seller has to present a negotiable transport document and notably the bill of lading which is frequently used for the purposes of selling the goods while they are being carried. in these cases it is of vital importance, when using EDI messages, to ensure that the buyer has the same legal position as he would have obtained if the had received a bill of lading from the seller.

The 2000 revision of Incoterms took account of the spread of customs-free zones, the increased use of electronic communication, and the changes in transport practices. the new version offers a simpler and clearer presentation of the definitions of all the terms. as in the previous version, the trade terms of Incoterms 2000 are presented in a format which allows seller and buyer to follow a step by step process to determine their respective obligations. the terms have been grouped in four basically different categories; namely starting with the only term whereby the seller makes the goods available to the buyer at the seller's own premises (the E-term, Ex-work); followed by the second group whereby the seller is called upon to deliver the goods to a carrier appointed by the buyer (the F-terms FCA, FAS and FOB); continuing with the C-terms where the seller has to contract for carriage, but without assuming the risk of loss of or damage to the goods or additional costs due to events occurring after shipment and dispatch (CFR, CIF CPT and CIP); and, finally, the D-term whereby the seller has to bear all costs and risk needed to bring the goods to the country of destination (DAF, DES, DEQ, DDU and DDP)

Further, under all terms, the respective obligation of the parties have been grouped under 10 headings where each heading on the seller's side mirrors the position of the buyer with respect to the same subject matter. thus, if for instance, the seller has to arrange and pay for the contract of carriage we find the words “No obligation” under the heading "Contract of carriage" Seting forth the buyer position. 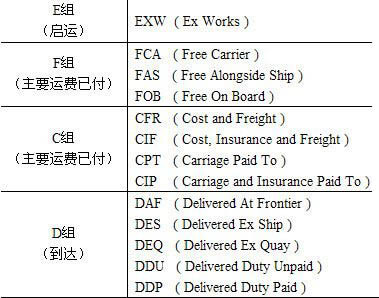 However, with respect to the division between the parties of duties, taxes and other official charges, as well as the costs of carrying out customs formalities, the terms explain for the sake of clarity how such costs are divided between the parties although, of course, the seller might not have any interest at all in the buyer's further disposal of the goods after they have been delivered to him, Conversely, under some terms such as the D-terms, the buyer is not interested in costs which the seller might incur in order to bring the goods all the way to agreed destination point. Following is a chart setting out the classification if Incoterms 2000

Compared with the former version. Incoterms2000 seem to have few changes. that shows the wide recognition of the Incoterms which makes it necessary to consolidate on the recognition without making many changes. However, substantive changes have been made in the following areas;

1. the customs clearance and payment of duty obligations under FAS and DEQ;